Heavy metals and chemical overload could be destroying your health.
free DISCOVERY call 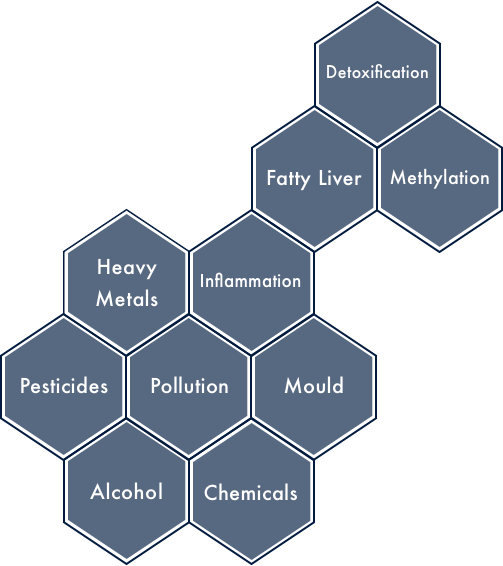 DETOXIFYING ROLE OF THE LIVER

Did you know your liver is the largest internal organ and one of the hardest working organs in your body? Overburden your liver with a toxic lifestyle, environment and diet and this can result in weight gain, feeling heavy, bloated and sluggish.

If toxins are not expelled from your body, they recirculate through the blood and affect many organ functions. Toxins will affect your nervous system and mental function, leading to fatigue, depression or anxiety. Chemicals are stored in fatty tissues, the largest collection of fatty tissue in the body is the brain leading to neurological damage. The build-up of toxins and chemicals may cause allergies and skin reactions. Inadequate detoxification causes accelerated aging and promotes the onset of many degenerative diseases. Chronic diseases such as cancer, autoimmune disease, heart disease, neurological disease, diabetes and obesity can also be linked to a toxin overload. Genetic factors also determine how well you handle exposure to toxins. Our lab testing can pinpoint genetic factors that are affecting your capacity to effectively metabolize certain toxins.

The 3rd body system is based on both anti-oxidant protection and liver detoxification. When this system beaks down you are at risk of damage from free radicals and chemical toxicity. It is estimated that each of us is carrying at least 700 different types of toxins, most of which have never been studied. One large scale US based scientific study identified 287 industrial chemicals in newborn babies.
free DISCOVERY call

SIGNS THAT YOU ARE NEEDING DETOXIFICATION SUPPORT

If you say yes to any of these, you need to introduce liver support.
‍‍ 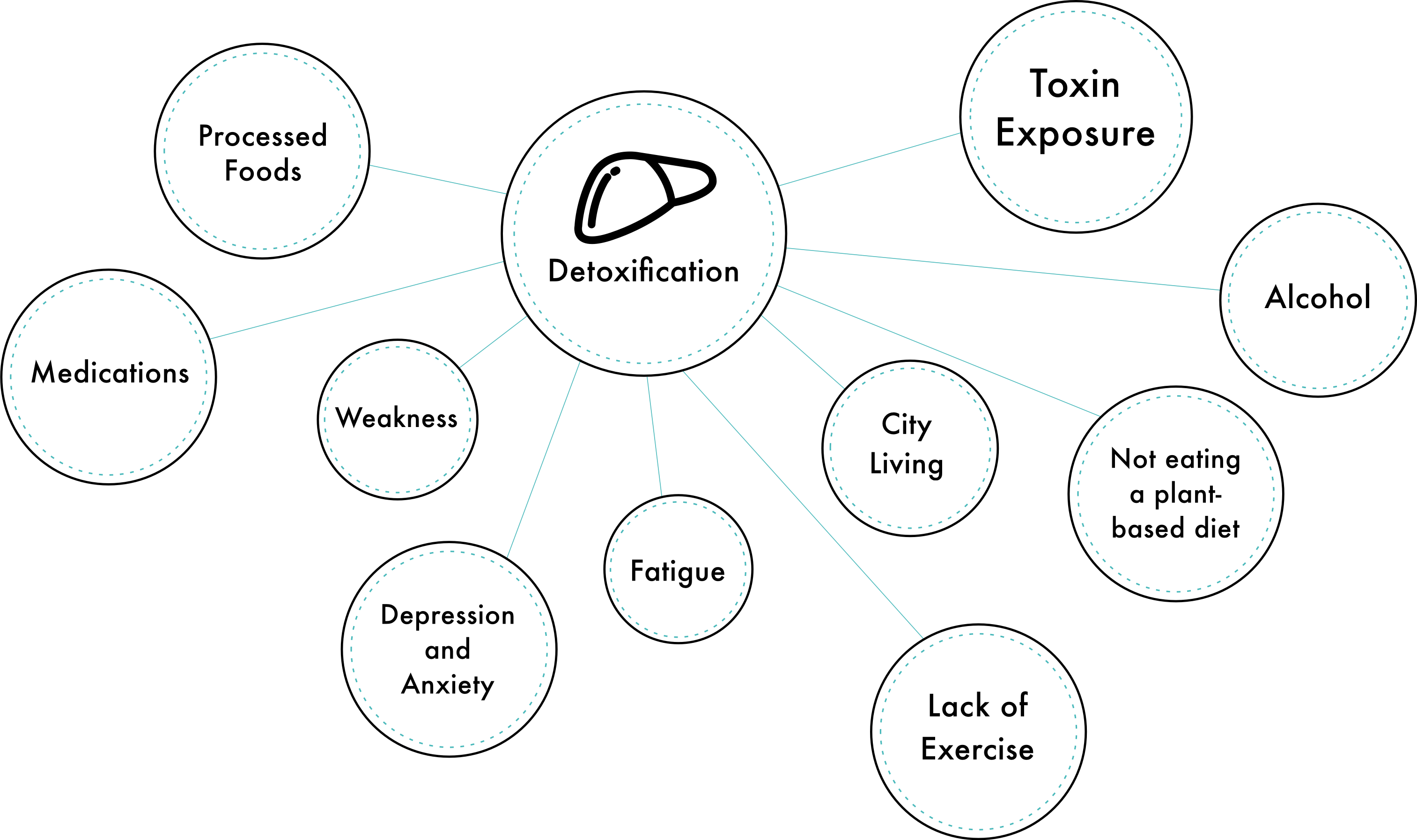 JUST HOW CAN YOU AVOID THESE DAMAGING TOXINS?

The definition of toxic is “containing or being a poisonous material especially when capable of causing death or serious debilitation”. It is impossible to completely avoid exposure to environmental pollutants (car exhaust, cigarette smoke and industrial chemicals) that accumulate in our air, water, food and soil. 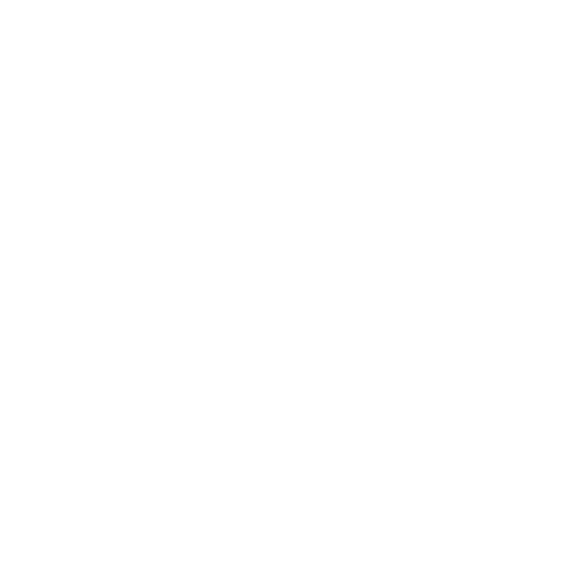 Digestive Complaints getting you down?
‍Take this short quiz and find out if this approach is right for you.

PROTECT YOURSELF FROM THE DAMAGING EFFECTS OF OXIDATIVE STRESS

Antioxidant protection is crucial, find out how you can protect yourself from damaging effects of oxidative stress.‍
If you are interested in long term health and slowing down the aging process, then it is crucial that you keep oxidative stress in check. Oxidative stress, also known as free radical damage has been implicated in many degenerative diseases. It is caused by free radicals during normal processes like digestion, breathing and exercising. A healthy body will produce a small number of free radicals. When production of free radicals becomes excessive, the antioxidant mechanisms of the cell become overwhelmed and free radical action cannot be controlled, leading to impaired cell function. The lipid membranes and the mitochondria within cells can become damaged. DNA may also be damaged leading to mutations and potential cancers.

Compromised digestive function or liver detoxification generates huge numbers of free radicals, if they are not controlled they will overwhelm our natural defences. When our cell’s DNA is oxidated, it leads to structural damage of the DNA, a process that can cause cells to mutate and turn cancerous.
Schedule my free call
Book appointment
Thank you! Your submission has been received!
Oops! Something went wrong while submitting the form.

IS YOUR HOME POSIONOUS?

People rarely think of their own home as being toxic. Findings by the Environmental Protection Agency found that toxic chemicals in common household cleaners, often in the form of fumes, are three times more likely to cause cancer than other air pollutants. The quality of indoor air is being constantly degraded by products we are using to clean our homes. The obsession with cleanliness is sometimes to our detriment. 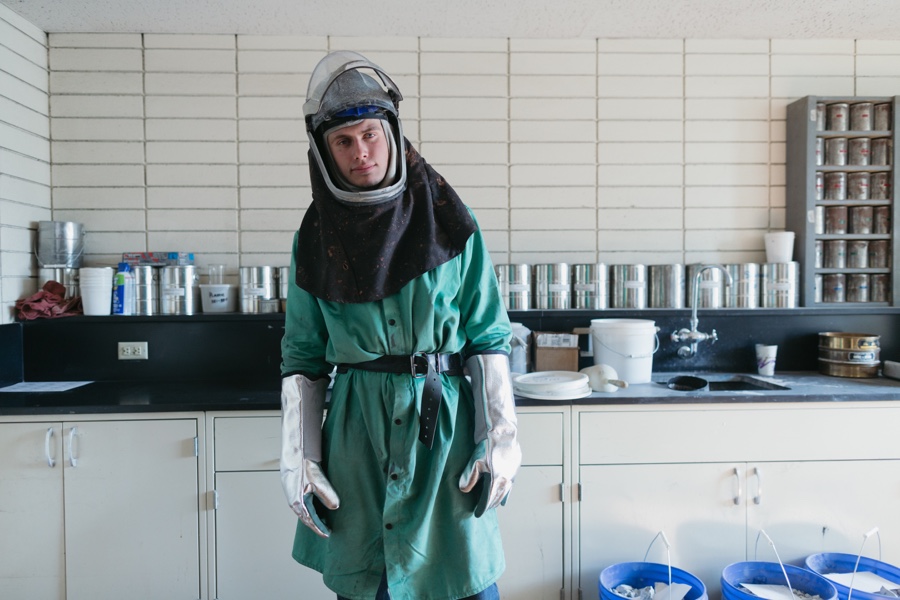 These chemicals can interfere with your endocrine (hormonal) system and cause adverse developmental, reproductive, neurological and immune effects. Pharmaceuticals, pesticides and plasticizers such as bisphenol A are common endocrine disruptors.

Endocrine disrupting chemicals with estrogenic activity can cause a large range of health effects. They have even been implicated in diabetes and obesity.
free DISCOVERY call

WHY IS THERE SO MUCH MISINFORMATION AROUND DETOXIFICATION?

THE SCIENCE OF DETOXIFICATION

Supporting your detoxification pathways is crucial for people overloaded with chemicals and heavy metal toxicity. Increased toxicant exposure is a modern fact of life, the damaging impact these toxins can have depends on your ability to process and remove them. 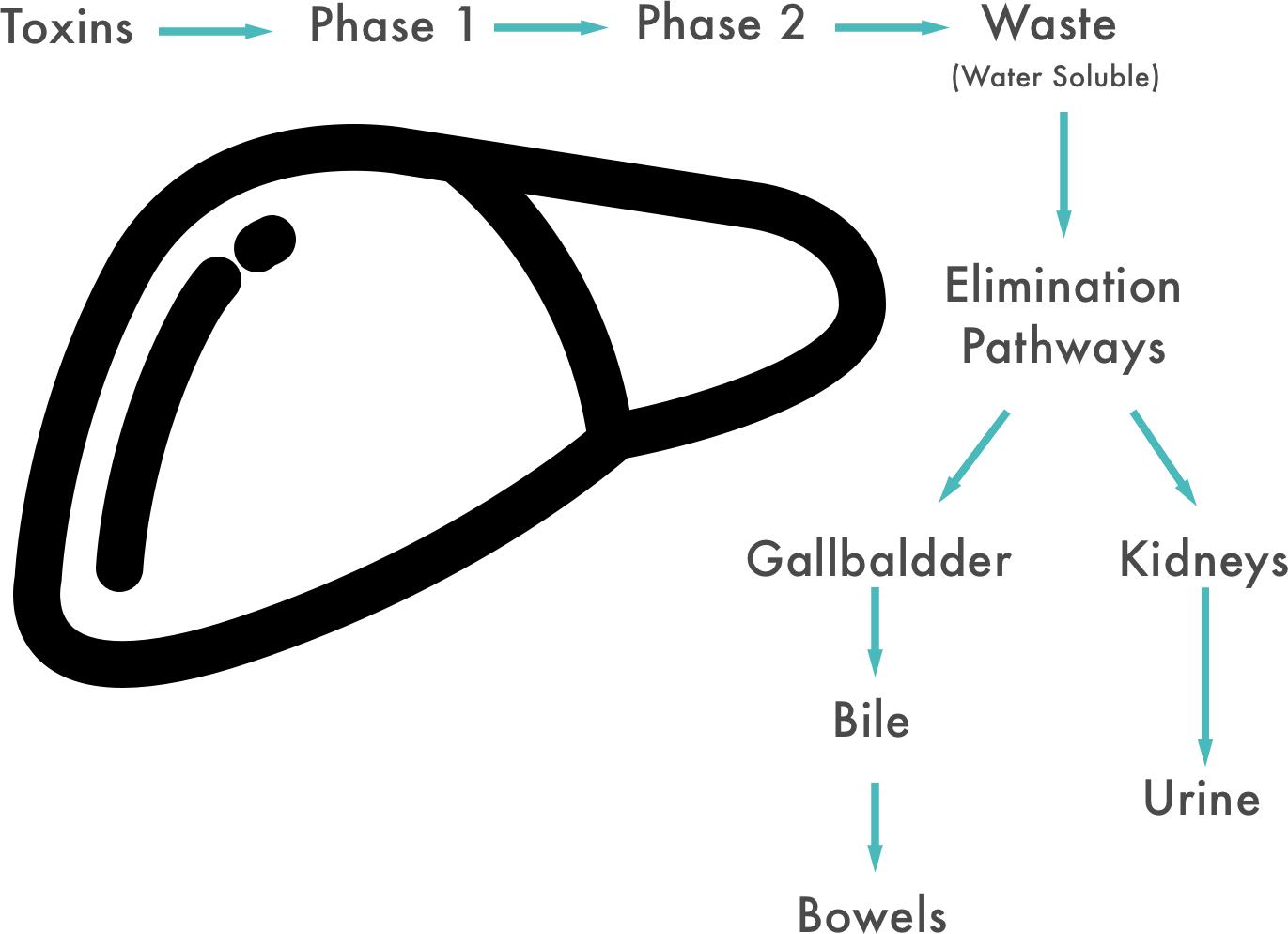 01
Phase I Detoxification
There are two distinct pathways of detoxification within liver cells. During phase I a toxic chemical is converted into a less harmful chemical via multiple chemical reactions. These reactions are known as oxidation, reduction, hydrolysis, hydration and dehalogenation. Phase I is initiated through the Cytochrome P450 enzyme system which essentially reduces toxins to smaller fragments.
02
Phase II Detoxification
After the toxin has been broken down to smaller yet still dangerous fragments, phase II known as the Addition or Conjugation phase consists of the addition of another substance to render the toxin less harmful. This results in the toxin or drug becoming water-soluble, so it can then be excreted from the body in the bile or urine. If your gut health is compromised and you have increased intestinal permeability, commonly called leaky gut then you will reabsorb the toxins as they are excreted in the bile through the digestive system.

WHY EVERYONE NEEDS TO SUPPORT HEALTHY DETOXIFICATION

Supporting detoxification pathways is a crucial part of healing in our functional medicine programs. These programs are carried out after extensive lab testing and after the hormonal and digestive systems have been addressed. Exercise, sweating and saunas are also important components that are often used in our programs.T

he initial assessment for the detoxification system is the Organic Acids test. Further testing may also be required to determine heavy metal burden from lead, mercury, arsenic, cadmium and other toxic metals together with chemical sensitivities.
I'm Ready To Take Back My Health 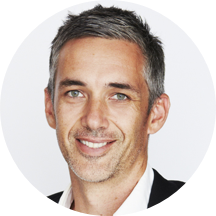